Note: Club members wish Garry Foley all the best with his recent health issues. Look forward to that Tasar blitzing the field again shortly. Get well soon Garry. Best Wishes from all of us!

The results for the races sailed on 15 February 2020 have now been posted in the results. Dave Ginty and friend set a great course in the light and shifty E-SE winds that came and went, gradually filling in as the race progressed. The course was short but turned out to be just perfect for the conditions. Well done Gave. The race became an epic battle with 5 yachts storming down to the last mark, in a close tussle, with less than a boat length between them. Geoff Carne (Laser Full) prevailed after starting will back in the fleet. Second was Peter Eslick (Spiral) and then Mike Wootten (Spiral) and Richard Pryor (Spiral). The close finish showed the benefits of handicap starts. A single triangle Sprint event followed which was won by Merv Lotze (Spiral), from Peter Eslick (Spiral), Greg Thornton (Laser Radial), and Geoff Carne (Laser Full).

The next race is a Championship and Sprints event event on 22 February with John Anderson on Duty. There will be a short race for the Sailing School members beginning at 1230 over a shorter course to help them transition to racing with JBSC. See you all THERE, and THEN for the second race of the 2020 season.

For Results for the Club races

A wonderful Regatta was enjoyed by more than 40 competitors sailing a wide range of yachts. A full set of SIX Races was competed in a wide range of conditions which provided a great test of abilities and strategies. Winds ranged from 5-10 knots (S-SE) on Saturday to 12-20 knots on Sunday (NNE), with some larger gusts, which saw many capsizes especially in the International Canoes, and some breakages in some classes.

Congratulations to Geoff Carne (JBSC), (sailing 'Josie') who won the International Canoe National Championships from (Syntax - Craig Phillips), (Twist of Fate - Hayden Virtue) and (NoName - Sean Langman). Geoff won the last race with a sail that began to tear about half way through the race, and which got progressively worse throughout the race. Well done Geoff. Twist of Fate was the only other International Canoe to finish the last race.

The NSW Windrush Championship was won by (Titan - Bob Porter), from (The Fox - Kurt Griffiths), after a count back, as they shared equal points after 6 races. Third was (Goroove Thing - Tony Sanderson), and fourth was (Exit Plab - Paul Leaudais).

Special thanks to Steve Lymbery who ran the regatta for JBSC, and all the JBSC club members who helped to make the regatta an enjoyable success.

Come Back next Year Folks!!!
See you then!!!


2. The Rules evening hosted by JBCYC was a great success with more than 40 people attending from 4 local clubs. Great to see the local clubs together for such events.Australia Sailing Racing Rules Evening Oct 19, Callala Club

3. For Trailer Sailers - The Illawarra Yacht Club will be holding its 35th Annual Lord Mayor's Regatta on 16th and 17th November 2019 on Lake Illawarra.

4. Club Race Program
See the DRAFT PROGRAM and the DRAFT DUTY ROSTER
Please advise of any changes. Please NOTE: Changes to the roster are made via SWAPS.

Note: A new membership category of 'Crew' has been added for $55 per year. Crew Members shall be entitled to all the privileges of the Club other than the right to hold office, vote at the annual general meeting, or vote at committee meetings. Crew members do not have the right to enter a yacht in events conducted by the Club. However, a yacht entered by a Full Member, may be skippered by a registered Crew Member, provided the Full Member is on board. Crew Members will be registered as Australian Sailing card holders (SIN) by the club, to satisfy the 46 PERSON IN CHARGE rule, and would be covered by personal accident insurance provided by Australian Sailing. Casual crew are encouraged to join the club as Full or Crew Members, after they have sailed three races as guest crew in a season. Crew who are financial members of other clubs, and have a current SIN, are not necessarily required to join the club, but it is encouraged, if they crew regularly. Associate members do not sail but enjoy the social benefits of the Club and its activities.

For News, Upcoming Events and Regattas, and For Sale Notices see NEWS

Jervis Bay Sailing Club conducts races at Callala Bay on Saturday afternoons throughout the sailing season, from the October long weekend to the end of May, inclusive. Briefings are at 1:00pm and races start at 1:30pm. 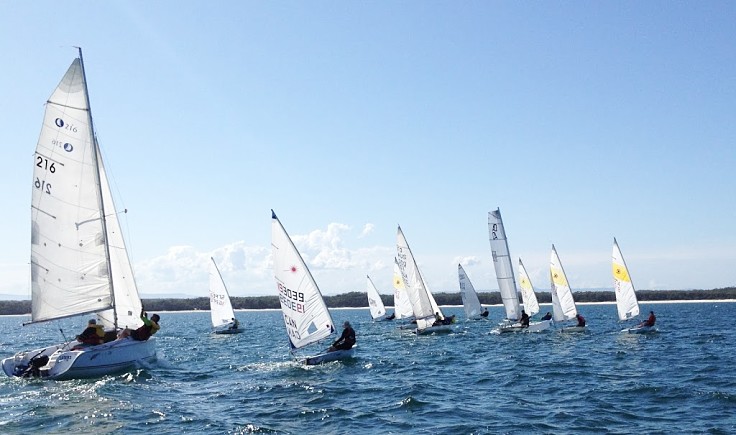 Additional Frostbite Series races are held on the first Sunday of every month during winter off season, briefings are at 1:00pm and races start at 1:30pm. The club also hosts Special Events and Championships - see Special Events for details.

We are located near the Callala Bay Boat Ramp. The street address is 42 Boorawine St, Callala Bay, NSW, which is approximately 3 hours from Sydney and Canberra.